Analysts and investors are increasingly focused on the carbon implications of their investments.

Saudi Aramco’s recent bond prospectus highlighted the low carbon intensity of its production as an attractive, differentiated feature of the company.

Post-IPO, investors will expect continued high performance on this topic and an easy win for Saudi Aramco to drive improvements is by continuing to tackle flaring.

TODAY THEY JOINED THE WORLD BANK’s ZERO ROUTINE FLARING by 2030 INITIATIVE, setting out a statement of intent to do just that…

Today Saudi Aramco joined the World Bank’s Zero Routine Flaring initiative, and shortly, Saudi Aramco is listing, bringing an expected $60bn to market. The IPO is likely to drive increased transparency and accountability inside the company, and bring additional scrutiny from outside it. This is likely to have a positive impact on its competitiveness.

From its listing onwards, Saudi Aramco will be compared to its oil major peer group on everything from its Total Shareholder Return to its capital projects delivery schedule to the carbon intensity of its products. The company will need to continually articulate the competitive strengths of its existing offering and its plans for the future. It will then need to prove the quality of its performance against these plans to maintain investor trust.

In its recent bond prospectus, Saudi Aramco outlined one of its competitive strengths as “Crude oil extraction with a low average carbon intensity”. This is a fair assessment, according to the IEA (see Figure 1) and a recent paper in Science. As the company states on its website, the paper ranks the company as the lowest carbon intensity of any major producer to extract, process, and transport its crude oil to the refinery gate (excluding emissions from product combustion). 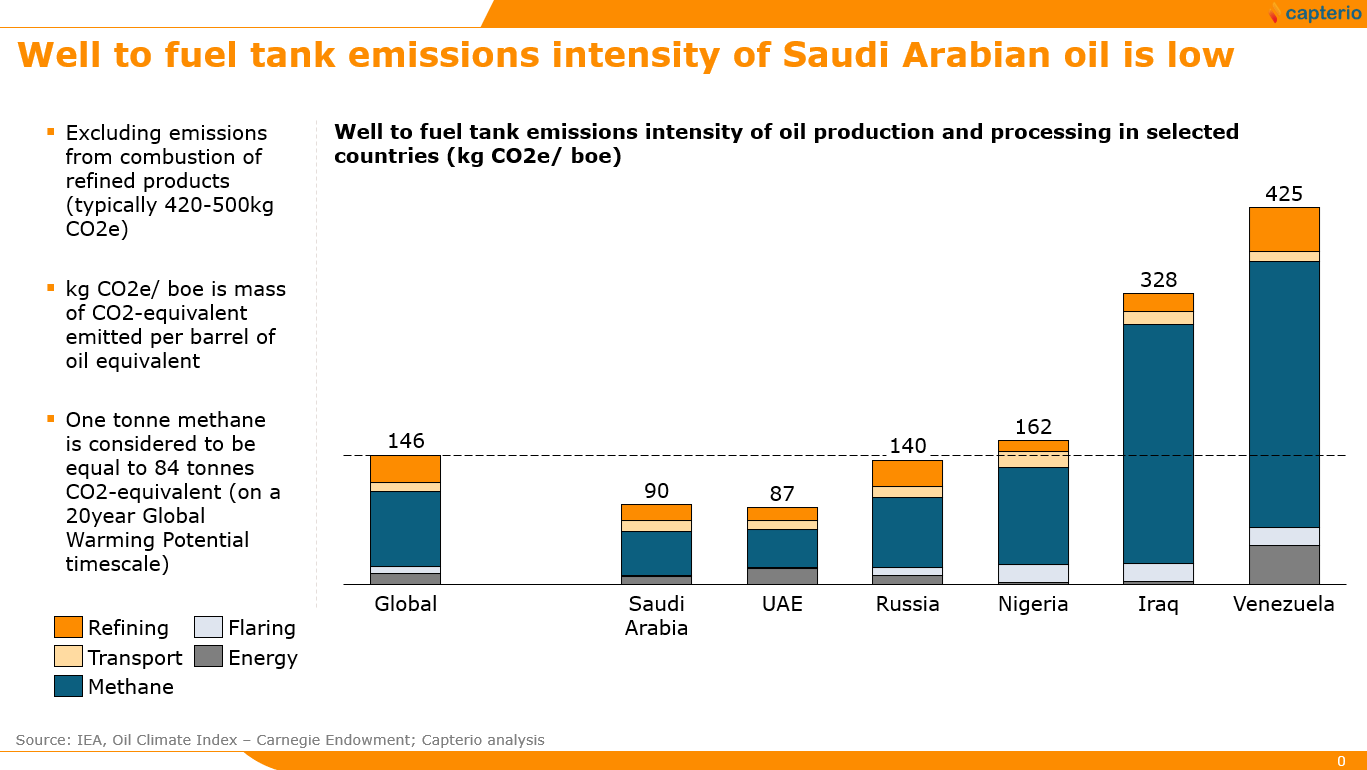 Figure 1: Well-to-fuel tank emissions of Saudi Arabian oil vs. peer countries, adapted from IEA (Excluding emissions from refined products) . Note that we have recalculated the CO2-equivalent emissions using a 20-year, rather than 100-year timescales as per the original analysis from the IEA.

Carbon intensity as a point of differentiation for oil majors

Investors are deciding to increasingly allocate capital to low carbon responsible investments. Carbon intensity is therefore an increasingly critical point of differentiation for oil majors to attract capital and generate value. Equinor is framing itself as “an industry leader in carbon intensity…with a carbon intensity half of the industry average.” Shell, Total and Repsol are accounting for scope three emissions (i.e. those of their customers) in their long-term strategies. Shell is linking performance on emissions to executive bonuses. These decisions enhance environmental and social license to operate, ensuring continued access to financing, but may also provide financial advantage in the future. In countries that begin to levy carbon taxes, low carbon intensity will likely translate to price advantages for companies (Figure 2). 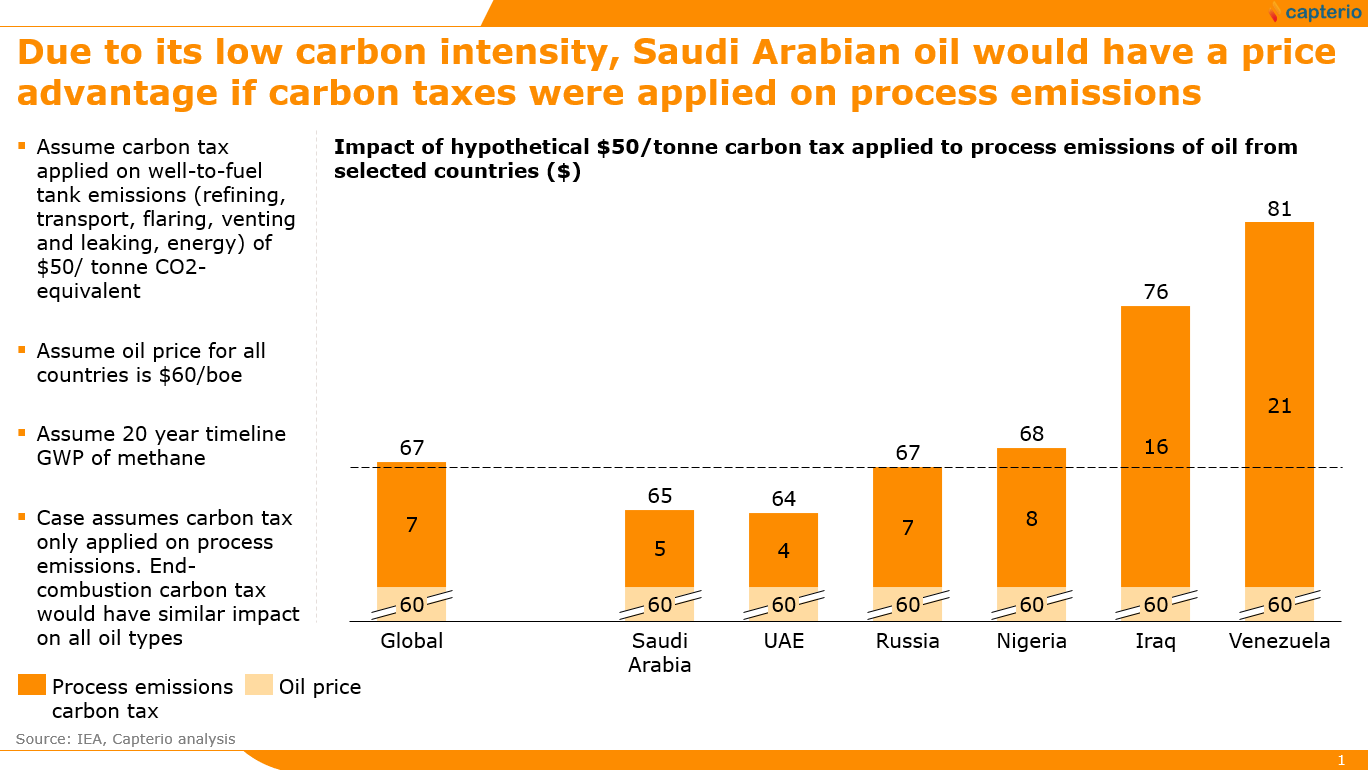 Figure 2: Impact of a $50/ tonne carbon tax on well-to-fuel tank process emissions (refining, transport, flaring, venting, leaking, energy etc.) on the total price of a barrel of oil from selected countries (with simple assumption that price of crude same from all locations). Case does not look at impact of a carbon tax on end-combustion emissions of fuel types, in which case price would be more in range $540-$640/boe

In order to ensure sustained competitive advantage on the carbon intensity of its production, Saudi Aramco will need to articulate how its future will continue to be ‘greener’ than its peers.

Saudi Aramco and its flaring story

To date, Saudi Aramco has seen notable improvement on flaring. With the building of their Master Gas System in the 1970s to tie-in associated gas, Saudi Aramco reports it cut flaring from 4000mmscf/d to ~200mmscf/d. Today, the company has a program dedicated to flaring minimization, and actively reports on its successes (for example at Tanajib). The government of Saudi Arabia is a signatory to the World Bank’s Zero Routine Flaring initiative and today the company joined the initiative.

Continuing its efforts on flaring is one of the lowest hanging fruits for Saudi Aramco to drive further decreases in carbon intensity. According to Capterio’s satellite data, supported by figures from the World Bank, fourteen flares exist in Saudi Arabia greater than 4mmscf/d (Figure 3). On inspection, it appears that many of these flares are close to existing infrastructure and or markets and we believe that these are easy to commercialise, with likely many more in addition. 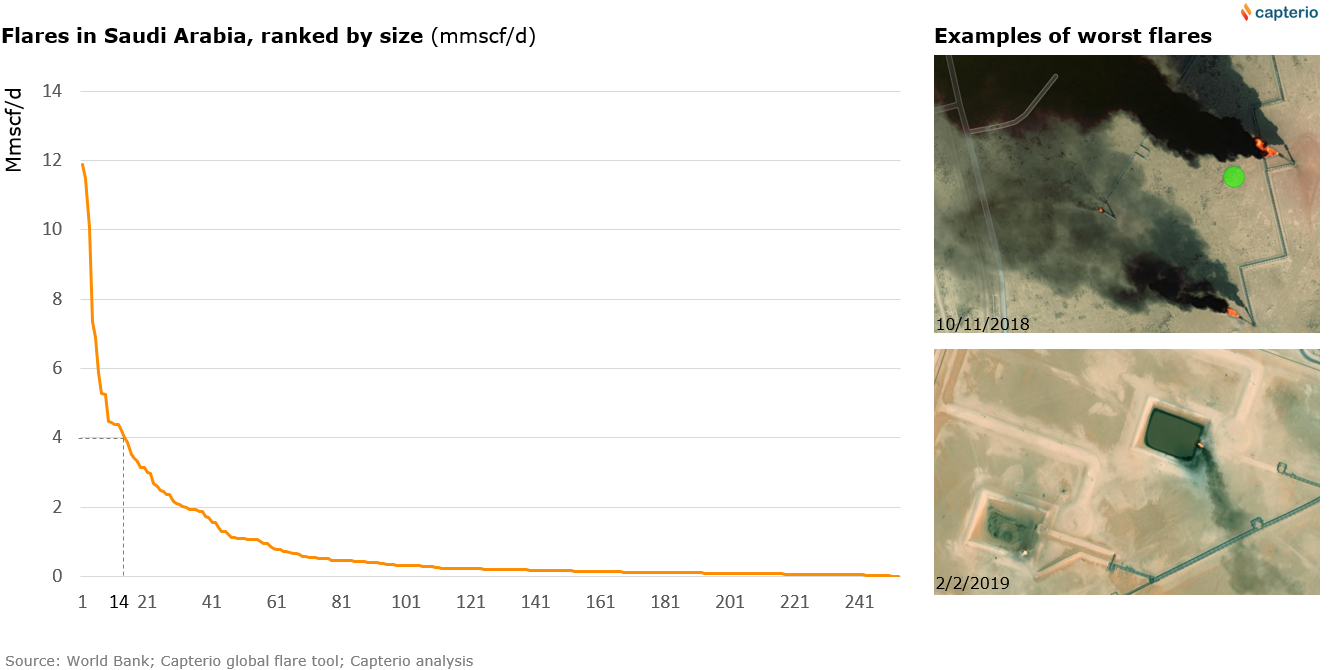 Figure 3: Graph of flares in Saudi Arabia, ranked by size (mmscf/d) in addition to two satellite images of some of Saudi Arabia’s largest flares (top image from 10/11/2018, bottom image from 2/2/2019). Satellite data is provided by the World Bank, the flare in the image is 12 million scf/d.

The opportunity to further monetize flared gas in Saudi Arabia

Capturing and monetizing flared gas in Saudi Arabia would not only create value, improve reputations, but also decarbonise the oil (and gas) supply chain. Given that gas is increasingly being used for high-end petrochemicals, for water production and power generation (here, displacing oil, for increased export), it also has considerable value in-country. Even more so given that Saudi Arabia is starting to explore for shale gas (it signed a deal with Halliburton earlier this year), considering building gas import infrastructure (from/via Russia, Iraq), and is even rumoured to be evaluating even LNG imports (it already has a deep interest in LNG trading, through its recent deals to purchase US LNG exports).

Capturing and monetizing the gas from all Saudi Aramco’s 14 flares above 4mmscf/d would unlock the potential of an additional 90mmscf/d gas product. That would bring ~$130 million additional revenues to the company and decrease emissions ~7Mt CO2e (assuming $4/mmbtu and 10% combustion efficiency). Whilst the additional revenues aren’t significant relative to net income of $111.1 billion in 2019, the positive environmental impact would be notable. Tackling all flares above 2mmscf/d would unlock an even greater prize (Figure 4) and would support the company’s ambitions to expand into natural gas. 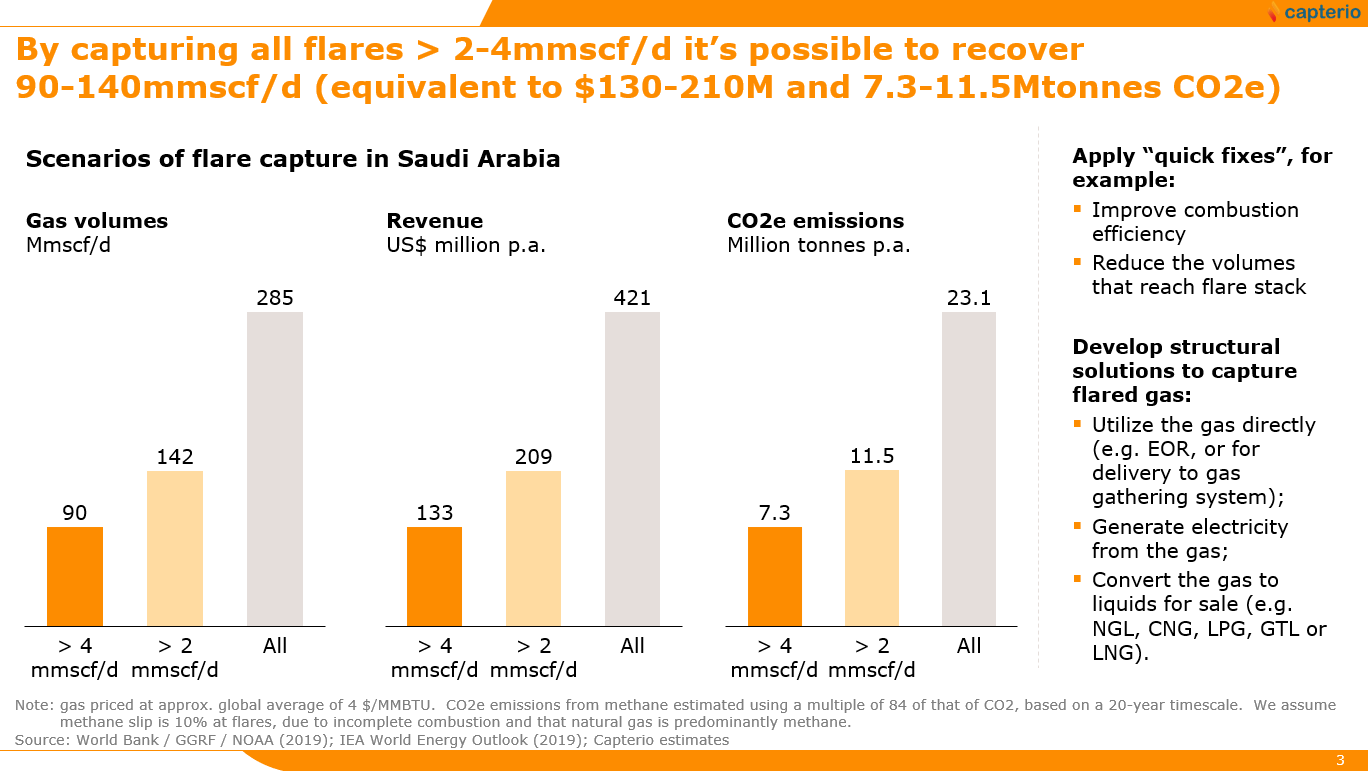 Flares of this size are therefore likely to be easily solvable with existing, commercial solutions. From the quick fixes (e.g. regular maintenance to reduce volumes that reach the flare stack) to the structural solutions (e.g. building relevant infrastructure like pipelines, injection facilities, units for power/ liquids conversion), flaring can straightforwardly be minimized to safety related only. Tackling major flares would help Saudi Aramco to continue to decrease its CO2 intensity, and further signify real company action on carbon to investors.

By eradicating flaring completely, and tackling the venting and leaking of methane, Saudi Aramco could decrease its carbon intensity by over 50%, to ~40kg CO2e/ boe on a pre-combustion basis. This would position Saudi Aramco as one the critical producers of low-carbon intensity petroleum products, cement long-term demand and potentially obtain a future ‘low-carbon’ premium for it’s product.

Now that’s an attractive proposition for investors to buy into.

Capterio is a project developer focussed on monetizing waste gas in oil & gas energy systems. We build solutions to capture waste gas and utilize it, taking it to pipelines, injecting it (for storage, enhanced recovery or disposal), converting it to power, liquids (e.g. CNG, LPG, GTL, LNG, etc) or other creative solutions.  We screen and source opportunities, we select and procure technology, we negotiate commercial contracts, we provide project financing – and oversee construction and operations. We bring together assets together with technologies, know-how and financing to deliver on-the-ground, real-world, safe and reliable solutions.

Thanks to inspirational reading from the BBC (see the flare which inspired this article in their piece here), Axios’article on Saudi Aramco’s climate change pitch and the Baker Institute’s paper on Saudi Arabia’s climate strategy. Thanks to Carnegie Endowment for International Peace for developing the great Oil-Climate Index which supported fruitful internal discussions.