Oil and companies invest c. $550 billion each year to explore and develop new oil and gas resources to replace the c. 60 billion oil-equivalent barrels (i.e. oil + gas) consumed each year, plus meet the additional growth the world is (still currently) demanding according to the IEA and BP.  Assuming steady state, each new barrel therefore costs to find and develop (with a unit cost of c. $9 per barrel, but considerably higher when production costs, royalties, and taxes are included), and often takes years to come onstream (typically between 3 and 10 for conventional resources).

The latest figures from the World Bank highlight the scale of the flaring opportunity.  Each year some 145 billion cubic metres of gas is flared, and probably at least another 16 BCM is released by flares as methane (due to incomplete combustion).  Add in the liquids which are released and combusted by the flares and together flaring wastes c. 2.8 million oil-equivalent barrels per day, or 1.7% of total oil and gas production (see figure 1).  That’s $27 billion per year of lost revenue potential and 1.3 billion tonnes of potentially avoidable CO2-equivalent emissions (more than airlines, see article).  In addition, there is, according to the IEA, an additional 112 BCM of natural gas that is being wasted as methane, through venting and leaking. Adding these sources of waste and the total oil-equivalent production to 4.6 million oil-equivalent barrels per day, $43 billion revenue opportunity and 7.7 billion tonnes of CO2-e emissions – see figure. 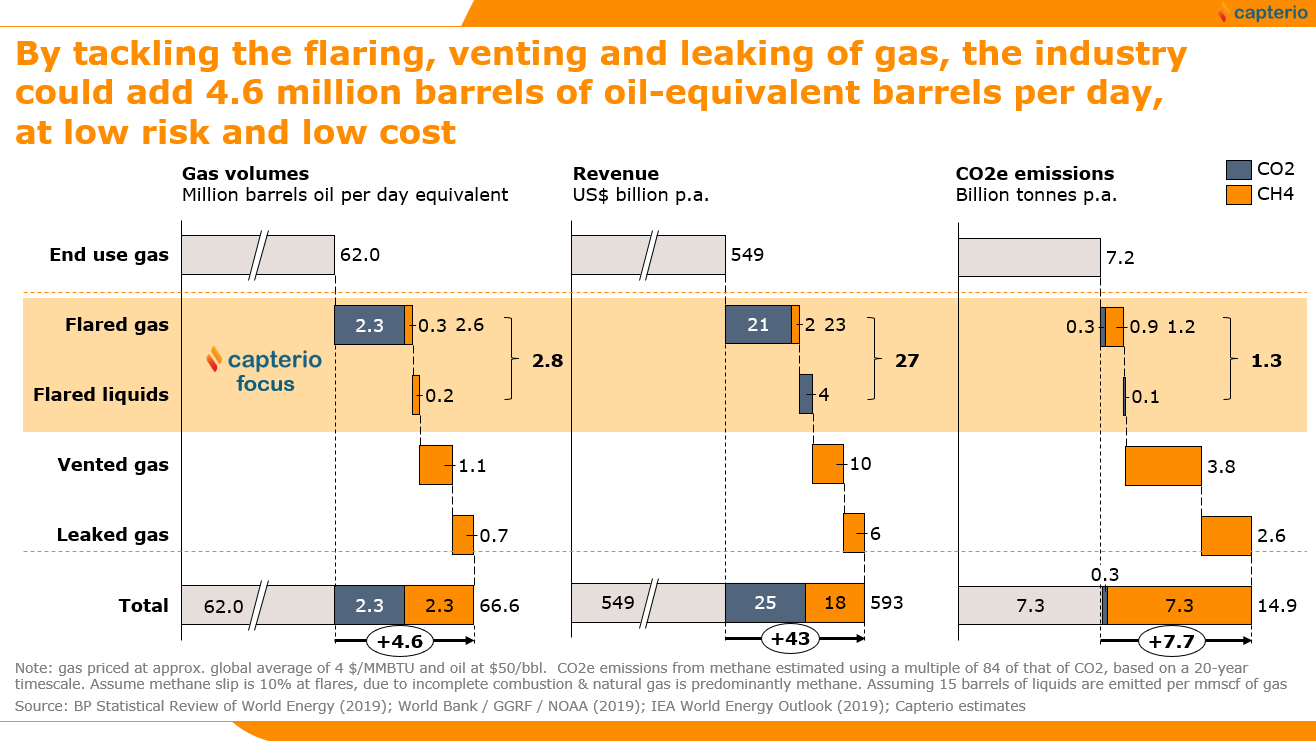 Figure 1: The size of the global prize from tackling flaring (burning of waste gas, often incompletely), venting (deliberate release of methane) and leaking (accidental release of methane). Data from World Bank GGFR, IEA and BP Statistical Review of World Energy . Note we are deliberately quoting the figures in terms of oil production (on an energy-equivalent basis) to make the linkage with global oil demand (see this article for data in conventional gas units).

Flare capture presents an immense opportunity and a better way

To be clear, flare capture is a huge opportunity, but it can be very complex technically, politically and commercially. But the prize is significant:

Firstly flare capture can add reserves and production immediately (saving years of development times and unnecessary infrastructure).  Secondly, unlike virtually all other resource types, there is near zero risk (after all the hydrocarbons have been found and developed – and produced – and the production outlook is likely stable over time).  Thirdly the resources are cheap (we estimate an upstream unit development cost in the range of $1-5 per barrel, some 2-10x cheaper than drilling a conventional producer well).  And fourthly, the barrels are low carbon (in the sense that the net emissions from delivering more energy to the market is virtually zero) – enabling countries to make a meaningful contribution to meeting their Paris climate agreement NDC commitments (see article) and accelerating the adoption of gas as a lower-carbon fuel to support the energy transition.

Putting this together, flare capture projects should stack up very well against almost all other growth options at oil and gas companies – and help them to make progress against the issue of our time, the climate crisis.  Put that another way: flare capture projects are one of the largest decarbonisation opportunities the fossil industry has – and in realising it, real commercial value can be created.

Seeing the value between the (palm) trees

Figure 2: Image left (courtesy of Getty and BBC ) highlights flaring at the Nahr Bin Omar natural gas field, just north of Basra, Iraq. Image right is a satellite image of (the plumes indicate that it is likely to be pulsating every few seconds) flaring from space, from Capterio’s Global Flare Intelligence Tool (GFIT), with image courtesy of Maxar Technologies and Google. Power transmission lines are seen in the photograph, and are clearly observable from space.

It’s interesting to consider an operation like the Nahr Bin Omar natural gas field (pictured above) – and to try and identify the opportunities between the palm trees.  Nahr Bin Omar is fairly typical (at least in it’s scale of flaring) of many fields we have evaluated world-wide.

Our unique and global Global Flare Intelligence Tool (GFIT) tracks and reports on 10,000+ flares in real-time.  Our analysis identifies that the Nahr Bin Omar field has flared some 45 million scf day from 4 flares for many years (quite possibly, for decades).  This waste, itself eye-watering, becomes more startling when a careful inspection of the power lines in the photograph highlights an obvious potential solution: turning waste gas into much-needed electricity.  (There are many other possibilities too as we have outlined in other articles, but Iraq has a well-known and acute need for power)

By capturing a flare like this, the asset owner(s) could add up to 9.1 kboepd (7.8 from oil and an additional 1.4 from associated liquids) by our calculations.  That’s an additional or 33 million oil-equivalent barrels (MMBOE) of proved reserves over 10 years (and likely considerably more given the field longevity).  At near-zero risk, this could be highly competitive with exploration and even most development projects.

Fixing this problem is frequently perceived to be challenging.  But whilst there can be many complex process engineering, political and organisational issues to address, there are also many practical solutions and opportunities for process optimisation (see article).

Indeed, one initial solution which could provide immediate improvement with liquids recovery and flare quality would be to better optimise the separator and field conditions.  Many operators today fail to fully realise the benefits of optimisation of their temperature and pressure conditions. A more comprehensive analysis that better explores the trade-offs (e.g. between the desire to meet crude RVP stability requirements vs. a desire to improve water separation vs. a desire to minimise the need for additional compression to deliver gas to the grid) can often identify opportunities to minimise systemic waste.

This satellite image also shows another interesting feature. The separate plumes of smoke in the image flare almost-certainly tell us that the flare is pulsating, perhaps every few seconds. These pulses possibly originate from episodic flow in the flare system that can result from sub-optimal pressure at the separator. Under these conditions, the flare may be entraining additional liquids into the flare stack, leading to the particularly black smoke. If these observations are correct, there is a clear case for process optimisation.

This opportunities for optimisation are important and deserve proper attention. Too-often we have seen situations being sub-optimised when decisions are driven purely by cost reduction rather than complete and well-evaluated economic analysis.

We have not looked into this opportunity in any detail, however, based on some of our recent work in North Africa, we might expect that flares like those in the photo could be abated for an upstream capital investment of the order of $18-30 million (to install separation, compression, and tie-in to the local pipeline grid – if available).  Assuming that power generation is the optimum downstream solution, based on similar-sized operations we might expect an investment of some $50-150 million in a power plant. That equates to an upstream unit development cost of $0.5-1 per barrel of proved reserves (or a total unit development cost of $2-5 ber boe), some 40-70% lower than the conventional projects of a similar scale.  Plus it would reduce CO2-equivalent emissions by up to 7 million tonnes per year (assuming 80% combustion efficiency, 30 barrels per scf of liquid and 20-year global warming potential of methane) and, very likely, deliver attractive returns on investment and NPV (Net Present Value) under reasonable fiscal terms and commercial structures.

Time for a tangible investment in Nahr Bin Omar?

The good news in Iraq is that a major flare abatement operation is already underway.  The Basrah Gas Company (a joint venture between Shell, the Iraq government and Mitsubishi) is already embarking on a major investment programme to recover the gas to generate power and reduce the import demand – with some considerable success (over a billion cubic feet per day is now captured, creating 3.5 GW of power).  Whilst three fields are currently involved (Rumaila, West Qurna 1 and Zubair) at 18 BCM there is room for considerably more.

And whilst this programme is very ambitious, there are hundreds of similar-sized opportunities globally, the core focus of Capterio.

In today’s challenging times for the oil and gas industry, we need fresh approaches.  With strong political will, consumer pressure and operational leadership, asset owners can partner with project developers which specialise in financing and delivering on-the-ground flare abatement solutions, such as Capterio to make a difference.  Together we can deliver a “triple win” (for asset owners, for governments and consumers, and for the planet).

Our industry has always been innovative and progressive.  Now the energy transition is underway we’re being called on again.

Together let’s get it done.

Capterio is an agile project developer focussed on monetising waste gas in oil & gas energy systems. We build solutions to capture waste gas and utilise it, taking it to pipelines, injecting it (for storage, enhanced recovery or disposal), converting it to power, liquids (e.g. CNG, LPG, GTL, LNG, etc) or other creative solutions.  We screen and source opportunities, we select and procure technology, we negotiate commercial contracts, we provide project financing – and oversee construction and operations. We bring together assets together with technologies, know-how and financing to deliver on-the-ground, real-world, safe and reliable solutions.

We would like to thank former colleagues at EDF, Shell and BP for lively discussions on this subject.